Every once in a while, Acts of Minor Treason hops out of New Westminster, lands in some other city with some other light- or heavy-rail transit system, and looks at different ways of getting around on two rails, whether it's on the ground, under it, or above it all. 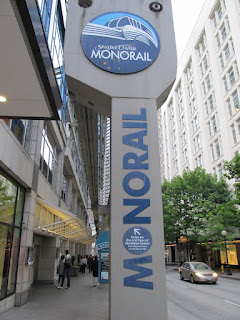 There was a time, not so long ago, when monorails were the future. Those sleek, shiny railways of the sky would glide as softly as clouds on unbending tracks across all the great cities of the world, lifting people above the choked and crowded streets and into the future. Culturally speaking, in the immediate postwar years the monorail was, like the rocketship, seen as intrinsically futuristic thanks in part to the promotional efforts of monorail manufacturers working to carve out a niche for themselves while the idea of mass transit was being reinvented. In North America, the average person's first encounter with a monorail would more likely than not have come at one of the Disney theme parks; the Disneyland Monorail opened in 1959, the first of its kind on the continent.

Perhaps, in the end, that was part of the problem.

Three years later, a second monorail started rolling on the west coast. As part of 1962's Century 21 Exposition in Seattle, Washington, the Seattle Center Monorail was built to connect the World's Fair grounds with downtown Seattle, two kilometers away. For seventy-five cents - more than five dollars today - an adult could board at the Westlake Mall station, and in a matter of minutes emerge at the foot of the Space Needle, centerpiece of the fair. It was quick, clean, and airy, and on the covers of the magazines right next to the Needle as an example of what America would look like in years to come. Granted, other World's Fairs also had their monorails, but unlike Vancouver in 1986, Seattle chose to keep its one-railed remnant of the exposition running.

Fifty years later the fair has moved on, and the future didn't unfold exactly the way they expected it to back in 1962. Nevertheless, the monorail is still there, making it one of the handful of American monorails that are not in an amusement park, a zoo, or Las Vegas - a reminder of what people looked ahead to once, but which the future never quite delivered. Today, while it's got long headways, relatively limited service, and seems to be mostly a tourist shuttle, it nevertheless has some role to play in the greater Seattle transportation network, such as it is... but if things had gone another way, it could have been so much more. 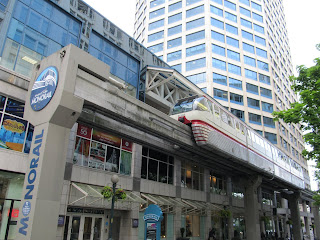 Red Train waits at Westlake Center Station.
If you want to visualize the Seattle Center Monorail, draw a backwards L and mark a dot at each end, one for Westlake Center and one for Seattle Center. Congratulations! You've now created your very own rough monorail route map, though it does gloss over some important bits: namely, it's more of a diagonal than a simple straight line. To put it in a Vancouver context, imagine if Expo 86 had seen the construction of the SkyTrain, but only between Main Street-Science World and Commercial-Broadway; sure, potentially useful in certain circumstances, but far too limited to be of significant value to the urban fabric.

From its western terminus at the Space Needle, the Monorail soars over the EMP Museum and runs south to 5th Avenue, which it follows southeast all the way to the Westlake Center terminus, just north of Pine and adjacent to the mall's food court. You'll find most of the track elevated above the median of 5th Avenue at approximately a third-floor level. For fifty years, that's been it - the two original World's Fair trains have been going back and forth across that stretch of track from morning until night, never able to venture further.

It's not like it's isolated from the rest of the urban transit network, though. At Westlake, passengers can transfer to the Seattle Streetcar or the Link light rail system, as well as the buses that provide service through the area, but there's no integration between the services. In particular, if you need to get from the monorail to the streetcar and it's raining, as it frequently does in Seattle, take an umbrella or resign yourself to getting wet.

This lack of integration extends to the fare structure; it's perhaps the only public transit system in the Seattle area that doesn't accept ORCA, the regionally integrated fare card system. I would imagine this comes down to it being privately owned, and in fact it may be one of the only transit systems in the West to pull in a profit. When it comes to fares the system is, in one respect, exactly where it was in 1962; it's cash-only, $2.25 for a one-way ticket or $4.50 for a round trip. In other words, only slightly more expensive than if Link trains served Seattle Center instead, based on that system's downtown pricing. Fares can be bought either at old-style ticket booths or, if it's a bit later in the evening, aboard the moving train itself. Depending how long it takes to get your change together, you might end up putting your wallet away just in time to alight at the far end of the line, and even though Frasier and Niles managed to sneak aboard without paying in that one episode of Frasier, it's the sort of thing that I can't see being easily pulled off in reality... beyond the bottlenecks, there just don't seem to be that many people boarding any particular train.

If you're a heavy monorail user, though, the operators have something special for you; a regular monthly unlimited-use pass can be got for the low, low price of $45, which makes me curious as to how big the potential market is of people who are literally just going from point A to point B. I suppose if you work at the Space Needle and live downtown, it just might be the deal of a lifetime as long as you have a sufficiently broad definition of "deal." 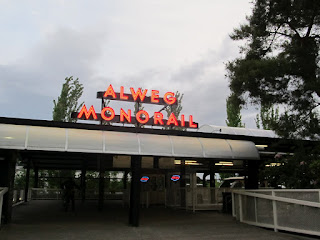 The monorail station at Seattle Center has changed significantly since 1962.
Even though there are only two stations along the Monorail, they're at least distinguished from each other architecturally. The Seattle Center station still retains echoes of its World's Fair appearance, most notably in the "ALWEG MONORAIL" sign above the entrance. At the Seattle Center station, the usual station design is turned on its head; while there's no fixed barrier to entry aside from the cashiers' booths, there are banks of turnstiles to pass through upon exiting. The Westlake Center station additionally incorporates platform doors and a barricaded boarding area, made necessary due to the station's elevation; it would hardly be good for business if someone took a thirty-foot swan dive into traffic.

It's easy to forget that the Monorail is a transit system. The design of the stations themselves, the cashiers' booths in particular, put me more in the mind of an amusement park attraction - and, realistically, that's what it was built as. The souvenier penny grinder on the Seattle Center platform is just another reminder of that. Both are open, airy and covered, though at Westlake Center there is a small gap between the train and the station roof; not enough to get more than a drizzle on you if it's raining, but enough to remind you that dammit, it's raining again. 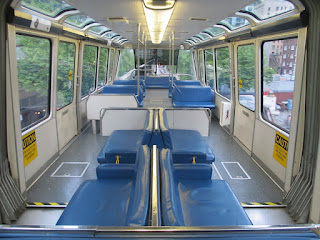 The interior of Blue Train, looking toward the rear.
The Seattle Center Monorail runs two trains, which have been consistently in service since 1962 - Red Train and Blue Train. They were built in West Germany by Alweg, the same company that built the Disneyland Monorail and which had great plans to build a monorail in Los Angeles, only to see them rejected in favor of the City of Angels building nothing at all for the subsequent thirty years. They hold up well for fifty-year-old machinery, and while they're not nearly as loud as a SkyTrain when moving at speed, they run very rough; I'm not sure if this is an intrinsic issue, or just a result of the trains' age.

The trains' interiors are wide, airy and bright even under cloudy Seattle skies; after all, the first passengers would have been gawking at the brand new Space Needle. In addition to the wide windows that take up most of the wall space outside the articulation points, there are rows of long, thin windows where you'd find ad space on a bus or subway car. Likewise, the layout of the seats is designed to maximize sightseeing opportunities during the short ride, to the extent that you'll find rows of sideways-facing bench seats in the middle of the train. The seats themselves are comfortable, but it's not as if you'll be staying in them for long - I do recommend sitting during the trip, though, if only because of the bumpy nature of the ride. 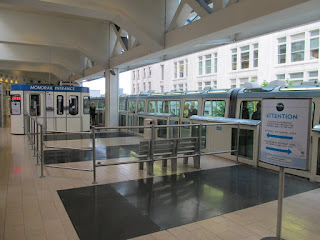 It's not exactly a "just walk on" honor system thing here.
You'd be hard-pressed to simplify the Seattle Center Monorail beyond what it already is. There's no need for rollsigns, destination screens, and only a scarce requirement for next-train departure notifications; the signage states fifteen minutes or better, but the pamphlets claim "every ten minutes" and in my own experience, I barely had to wait at all; I suppose I just got lucky. For a point-to-point transit system, it delivers precisely what it promises.

Unusually for something designed and built in the 1960s, the Monorail's stations are fully accessible, with elevators in addition to stairwells provided for access to the elevated Westlake Center platform. These separate access points likewise guarantee the Monorail's accessibility after the mall itself closes for the evening, a necessity since the Monorail continues running until 11 PM. 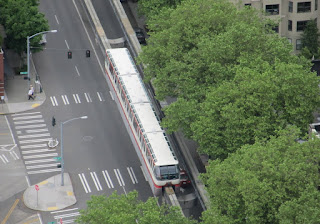 Red Train glides above Vine and 5th en route to Seattle Center, as photographed from the Space Needle.
Fifty years ago, Seattle was given a seed that could have grown into something great, a system that could have brought rapid transit service to all the corners of the city. As recently as ten years ago, exactly that was in the offing: the Seattle Monorail Project pledged to deliver a network of half a dozen monorail lines radiating outward from the 1962 core, delivering a degree of service that the new light rail system isn't planned to rival until decades from now. Yet its monorail dreams were dashed by the harsh light of reality, and what was built in 1962 is still all there is in 2012.

My own belief is that it's Disney's fault, the fault of the amusement parks. When the monorail was installed at Disneyland in 1959, it was an emblem of progress, of the future, a piece of the new world that people in the immediate postwar years were still eager to seize. However, with the Seattle monorail remaining locked in its original scale and other monorail projects failing to get off the ground, the idea of monorails became more and more associated with amusement parks and tourism. Riding it today, the Seattle Center Monorail seems almost emblematic of lost promise; after all, there's no reason monorails couldn't be a vital part of the rapid transit mosaic, as they are in places like Japan. The Seattle Center Monorail is like an old murky, window that looks into another time - in some way, it's the barest fragment of what could have been.