Planning and the Scarborough Subway

The idea of an extended Scarborough subway is sort of like the phoenix: it never dies. Alternatively, it's a hydra; every time the debate seems to settle and an agreement appears to be reached, it comes back and starts biting just when you've started to relax. First it was Hizzoner Rob Ford's refrain of subways subways subways during the last mayoral election and the first year or so of his term, when a build-out of the Sheppard line to Scarborough Centre was decreed to be Toronto's #1 transit priority. Last year saw the OneCity proposal by TTC chair Karen Stintz and Scarborough councillor Glenn De Baeremaker, which would have extended the Bloor-Danforth line east and north from its Kennedy terminus to a link-up with the planned Sheppard East LRT--which, I will remind you, was originally planned to have been completed last year--only for the plan to collapse in a council vote less than a month after being introduced.

Yet it seems that you can't keep a thing like the Scarborough subway down. It's come back in the news again in the past week or two, with Stintz pushing what appears to be pretty much the same thing she pushed with OneCity. The main point of contention is, as always, money: the planned replacement of the Scarborough RT with an LRT line already has committed funding from the province, while a subway extension has... maps with longer green lines on them.

I'm not really interested in going over the pros and cons of a Scarborough subway extension here. I've probably done so at some point in the past, and there are plenty of other places you can go for that kind of analysis. What I'm more concerned about is what got us into this situation in the first place--the planning in Scarborough, or rather, the lack of such. From my new digs in southern East York, I can see Scarborough from my balcony. When I go for a walk, it's still clearly evident where the old Bloor streetcar stopped running, even fifty years after it was replaced by the subway. 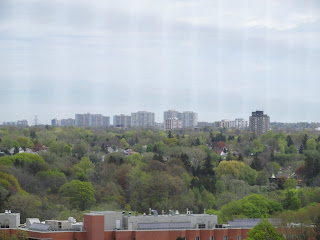 Pictured: Scarborough. Not pictured: allowances for the installation of rapid transit.

Until the postwar suburbanization boom, Scarborough was essentially farmland with isolated pockets of development here and there; I like to think that it resembled eastern Lulu Island or the undeveloped parts of Surrey's Agricultural Land Reserve today. With no constraints save those imposed politically, Scarborough's reeves and mayors oversaw the plowing under and paving over of more than a hundred square kilometers of land with new developments designed and built in accordance with the prevailing wisdom of the time: namely, that the car was king and everyone would be driving everywhere. What there wasn't any planning for--what there wasn't even any thought spared for, apparently--was how to integrate transit with the city once it reached the size to warrant it.

Even in the wake of the general streetcar abandonment of the 1950s and the rush to cars across much of the West, it's not as if cities didn't plan for the future. In Calgary, separated rights-of-way were reserved for transit usage decades before the city's C-Train system started rolling. In Los Angeles, Pacific Electric's rights-of-way were maintained even after the streetcars were removed, and today the modern Expo Line runs along one of them. In Coquitlam, where the in-progress Evergreen Line extension will finally bring SkyTrain service, development has been oriented around the expectation of rapid transit service since the 1990s. In Scarborough... in Scarborough, looking on Google Maps, the only empty corridors I can find are two hydro corridors, one paralleling McNicoll Avenue and another reaching from Victoria Park to Meadowvale.

To put it bluntly, Scarborough was not built for transit. Scarborough was built for the car, and we're now in the position of trying to find some way to haphazardly cram it in there. It's not an easy task; just as you can't unring a bell, you can't unbuild a city. We're stuck with the built forms bequested to us by past generations. It's up to us to find a way for them to keep working, despite it all.
Posted by Phoebe Barton at 12:00