The Empires We Choose Not to See

I'm going to start with a statement: empires are bad.

This isn't something I would have expected to be controversial five years ago because I would have expected people to know, in the same way that pain hurts and fire burns, that empires are bad. There are plenty of people who are well aware of how bad empires are, of course, but they tend to be the victims of empire. The primary beneficiaries of empire -- for those of you keeping score, that's white people in the Western world -- tend to be ignorantly innocent about it at best, and willing participants at worst. It's true that the last five hundred years is in many respects a history of empires, because when you have these organizations exerting their will across oceans and continents, impoverishing some to enrich others, they're going to leave a mark in the historical record. The modern legacy of empire is like the iridium concentration at the Cretaceous–Paleogene boundary; a global reminder of devastation and destruction.

But you wouldn't really get that impression from reading science fiction. Space empires have been a fixture of science fiction for practically as long as there has been science fiction, and while they were often meant as enemies -- take the Eddorians in the Lensman series -- science fiction's origins in imperialist states meant that the influence of empire would always be there. The venerable RPG Traveller is anchored around empire, whether it's plucky Terrans fighting against and replacing the aging Vilani Empire or the star-spanning Third Imperium; literary settings like Jerry Pournelle's CoDominium fills the future with a hegemonizing empire that seeks to incorporate all human worlds into its authority, with no exceptions; and the play-by-mail games of the late 1970s and early 1980s. The May/June 1983 issue of The Space Gamer reviews three of them -- Galactic Conflict, Starlord, and Star Venture -- and imperialism is in their bones. Take Starlord, where the players' goal is "to capture the Throne Star and become the Emperor, after which you get to play for free." For everyone else, it cost $2.50 to submit a Starlord turn ($6.11 in 2016 US dollars), which may make Starlord one of the few games where the player had a real monetary incentive for imperialism.

"Yeah," you might say, "but those are just games." I'd argue that games can shape the way we think and view the world just as much as anything else, and that these play-by-mail games were the precursors of modern 4X games, a genre designation which itself seems pretty innocuous until you think about it.

The standard playbook of the Earth-based empire, and there it is, copy and pasted into interstellar space, giving you opportunity after opportunity to commit atrocities in the name of winning the game. Practically encouraging you to do it, at times -- take, for example, the Stellar Converter in Master of Orion II. By the time you've researched this late-game weapon, you don't need it, but it lets you follow the example of the one science fiction empire everyone knows: it lets you destroy planets. Using it rewarded you with this video and nothing else. No political slaps on the wrist, no anger from the galactic community, just a fresh asteroid belt. I can't count the number of times I did it, because it was easy and quick and I didn't need that planet anyway. But that's the thing about empire: it compromises you. It whispers in your ears. Like Brian Aldiss said in his introduction to the 1973 Galactic Empires anthology, "morality is all very well, but give me luxury every time."

Which brings me to Stellaris. Stellaris is the most recent of the 4X games, released by Paradox Entertainment just last year, and may well be the most dense and complex computerized 4X game. As a game it has a lot going for it, but like everything, it has its own unspoken political assumptions. One of those is empire. Not in that the game allows you to build an aggressive, galaxy-spanning empire should you so choose -- but in that it uses "empire" as the default. No matter whether you're fanatic egalitarians running a space United Nations, materialist xenophiles advocating for the light of Science, or a pacifist spiritualist nation seeking to commune with the secrets of the mental realm, the game refers to you as an empire just as it does the xenophobic authoritarians who dream of galactic conquest. It's baked into the tutorial tips and even into the news updates that appear in Steam before you boot up the game itself. 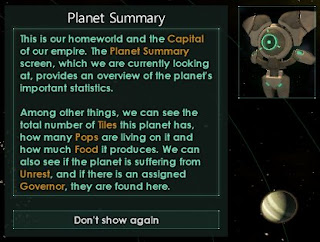 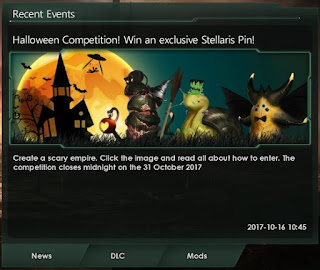 Funny, I'd have thought an empire was scary enough on its own.

The concept of empire is further rooted in the way the game works, too. The best government building you can build, which you can have only one of, is called the Empire Capital-Complex. There's an Imperial form of government authority, but in structure -- life terms and hereditary rulership -- it's just a monarchy. Just because a state is democratic doesn't mean it can't also be imperial, but the way they're set up as orthogonal here echoes an idea that's been made to percolate in the Western consciousness for a long time now. Hell, even if you're a fanatically xenophilic democracy that has embraced interstellar immigration for decades, the game still requires you to research a specific technology to get leaders who aren't of your founding species.

It's not so much that this is outright nostalgia for empire, I think, so much as it is divorced from the actual nature of empire. Unlike hyperdrives and psionic realms, empires are real things, and yet Stellaris treats it as if it's as neutral as using "lift" instead of "elevator." But there's a lot of hidden nostalgia here, the sort that Aldiss meant when he wrote about luxury. Up until recently, the general public tended to remember empires more easily because empires were the ones who wrote the histories. When they did, they remembered the accoutrements, the displays of wealth and power, and didn't stop to think about where that wealth came from and what that power was used for. (For those of you keeping score at home, the wealth was plundered from other people using that power.)

What gets me about Stellaris is that to me, there's a fairly evident disconnect between what was put there consciously and what slipped through unconsciously. One event, for example, has your scout ship discover a planet in the grip of an ice age but with industrial ruins, with the event text commenting on how nobody could understand how a species could be so foolish as to alter their own environment to uninhabitability. Another is how the humans are presented: the default United Nations of Earth, the "hero" humans, begin with a Black woman as leader, and the default Human species portrait is of a woman when in every other game I can think of, it's been a man. 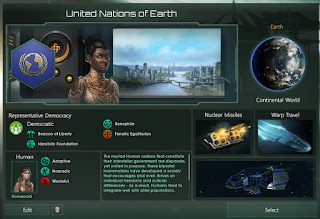 Fun fact: originally Humans had "Quick Learners" as a trait. They were only switched in a later patch to being Wasteful.

But you have to look beyond that to get to the unconscious choices, like the use of "empire" as something that's value-neutral. Take the in-game blockers; these are meant as stumbling blocks to your developmental aspirations, where mountain ranges, dense jungles, toxic kelp, or noxious swamps need to be cleared away with advanced technology for you to make use of the resources on the tile they occupy. You're trained for this by the inclusion of unique blockers on your homeworld. There are two kinds. One is industrial ruins, left over from "a past age of progress." This is the other one.

Yeah, nothing political in that choice of description, am I right?

You have to look at stuff like this to get a sense of the unconscious choices. You have to look at how Martin "Wiz" Anward, one of the people who built Stellaris, apparently saw nothing wrong with wearing a red "MAKE SPACE GREAT AGAIN" hat during the pre-release streams in early 2016, when the Orange One had already told us everything we needed to know about him. You have to look at the things that are, as far as the person who created them are concerned, are so obvious that they don't need any special attention drawn to them.

You have to look at the people who believe, uncritically, that empire is a good thing.
Posted by Phoebe Barton at 19:27 2 comments: