Once the decision has been made, once history has been written, there's always the temptation to sit back and wonder - "what if?" It's the age-old premise that only relatively recently led to the growth of the alternate history genre. What if things had gone differently? What if Stephen Harper had been shut out of his majority for a third time running on Monday night? It's a question that, I think, many of us will be asking between now and October 19, 2015. Elections are rich in potential points of divergence - like little else in a democracy, they provide opportunities for a country to back up, go forward, or veer off into an entirely new direction, to nullify a whole set of possibilities while opening even more.

It will be some time before the question of whether Harper's majority could have been avoided can be answered. It's been less than a week - we don't have the information. Beyond that, though, one problem with speculating about it - for that matter, speculating about the possibilities of divergence with any given election, is that most can't be reduced to one choice. It's an area where alternate historians can run into problems if they're not careful. It's one thing to say that history went on a different track because one man noticed a pack of cigars in a clearing; it's something else entirely to say that the future unfolded in a different way because the other guy was voted in. 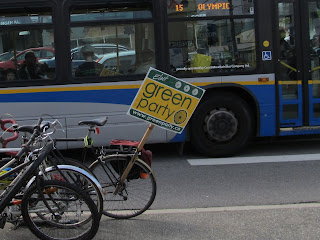 Outside of Saanich—Gulf Islands, generally not the choice of a new generation.
It's the problem of inertia. Looking back on it, the most believable choice I can come up with to deny Harper a majority in this election is to prevent the election entirely: that is, for the other parties in Parliament to not, for whatever reason, find the Conservative government in contempt over the F-35 issue. After that, it ultimately came down to fifteen million individual choices, and aside from places like Etobicoke Centre or Montmagny—L'Islet—Kamouraska—Rivière-du-Loup - ridings where recounts are underway after the winners squeaked in with twenty-vote and five-vote margins, respectively - it didn't really matter which choice any particular elector made. Unlike battles, it's not nearly as common for national elections to be so close and so hard-fought that it could easily have gone the other way. The parties and opinion-massagers can push their views and move their message, but in the end they're only trying to push something heavy and fast onto a slightly new course: like installing a mass driver on an asteroid to push it into a new orbit that does not lead to an impact with Earth.

I don't write much alternate history, but it seems to me that people who do would do well to consider the plausibility of mucking around with elections. When you've got it coming down to so many individual choices, all of them made for different reasons with different information, one of the most plausible source for major change is something delivered from outside - say, a terrorist attack during an election campaign. Aside from that, once the campaign has begun it's rare for things to change drastically; I'm certain that the out-of-nowhere NDP surge in Quebec will be studied and picked over by political scientists for decades to come.

Now that the votes have been counted, we're back to where we were before - where individual choices can make big differences.

I promise I'll stop talking about politics soon
Posted by Phoebe Barton at 12:08