PDP #13: The Folly and the Hope and the Future

While walking down Harbord Street in the University of Toronto one warmer-than-usual late winter afternoon, I came across a small, but hardly utilitarian, concrete structure that didn't appear to be doing anything at all. It was the sight of the plaque on it that drew me in. In my experience, only sites of some significance are so equipped. Sure, 99% of Toronto's history has been turned to ash or bulldozed for progress, but that last 1% can appear where it's never expected.

It was history -- but not old history, our history. History for the future. The structure marks the burial location of a time capsule cold in the soil for nearly forty years now, placed there by Pollution Probe's Donald Chant on October 14, 1970 - "Survival Day," as per the plaque. Despite the changes the world has experienced since then, the concern behind the words is still as real as ever:

IN THE HOPE THAT THIS TIME CAPSULE WILL BE FOUND BY A CIVILIZATION WISER THAN OUR OWN, WE HAVE BURIED HERE A RECORD OF MAN'S FOLLY ON THE PLANET HE'S OUTGROWN.
Nuclear war and "pollution," in the traditional sense, no longer bedevil us. Our worries now aren't just longer-term, they're harder to see. When I was young the great concern was the hole in the ozone layer, and it seemed as if the world did recognize the environmental dangers and so banned the use of CFCs. I'd be surprised today if a teenager had ever heard of CFCs or the ozone hole. Today, climate change is our great threat, made even worse by all those who prefer to believe that the science is flawed, that the actions of all of us are not nudging our civilization just a little bit closer to crisis and catastrophe. 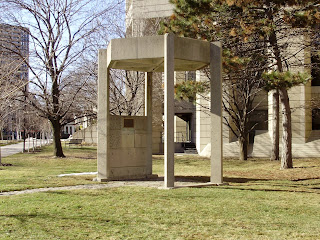 I, the copyright holder of this work, hereby release it into the public domain. This applies worldwide. In case this is not legally possible, I grant anyone the right to use this work for any purpose, without any conditions, unless such conditions are required by law.
Posted by A.P. Barton at 11:45