Beer has perhaps picked up something of a bad rap in history, something that North American culture seems to have only recently turned against. It was the layman's drink, the low-class drink, simple and utterly without sophistication - and that's when it wasn't just the devil's brew. Today the situation's a lot better; we have experimental microbrews, independent craft breweries that aren't bound by the crippling inertia that finds fertile ground in the big international brewing concerns, and a population of beer drinkers who are always looking for something new.

Sometimes, though, the new thing isn't new - sometimes it can be rather old indeed; old like Harviestoun Brewery's Ola Dubh Special Reserve 40, a numbered ale made in cooperation with Scotland's Highland Park Distillery. It's simple, the way they do it - they take a very small batch, as the label specifies, of their Old Engine Oil dark beer and age it in oak casks previously used to age Highland Park's 40 Year Old Single Malt Scotch Whisky. At first I thought the beer had itself been aged for forty years, but unless its makers have a pretty sweet DeLorean, that's impossible - the Harviestoun Brewery's only been around since 1985.

The bottle I bought is easily the most expensive single bottle of beer I've ever picked up - $19 at the LCBO, plus tax. That bottle of Ola Dubh came from an LCBO in Toronto, and it came with me across the country to Vancouver, sitting in my refrigerator while I waited for the stars to align and for opening it to be worthwhile. I mean, you don't just drink a beer like this with no occasion at all. I don't, at least, and didn't. If Rob Ford had lost the November 2010 Toronto mayoral election, I would have drank it then.

In the end, I waited until the evening of May 1st. At the time, with the death of Osama Bin Laden everywhere in the news and the New Democratic Party's surge in the polls making it seem like we were really on the cusp of tomorrow, I poured it into my grandfather's old Conners Brewery mug and drank to the future. The immediate future didn't exactly unfold as I'd have preferred; nevertheless, it was still a worthy occasion. 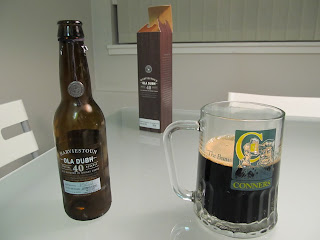 This is not the first bottle of beer I've bought that came in its own box; it's the second, after a limited-edition 2010 ale that I never ended up reviewing. Not only that, but after I pulled off the frilled foil top that covered the bottlecap, it revealed an icon or something about the size of a dime hanging from the string with Harviestoun Brewery symbols on both sides.

When I popped the bottlecap, I was struck by the smell: like the inside of a distillery, heavy with wood - presumably traces of the oak casks - and sweetness. It's easily the strongest smelling beer I've tried so far, enough so that I could almost taste it while holding the mug level with my chest. It produced barely any head when I poured it.

The beer itself is thick and viscous, rather reminiscent of motor oil - no surprise, considering it's made from Old Engine Oil beer, and the name "Ola Dubh" itself means "black oil" in Gaelic. I'm not a scotch or whisky drinker - really, I don't think I've *ever* had scotch or whisky - so I can't go into detail about the degree to which their spirits are mixed in, but to me it had a taste strangely like black licorice. It went down smoothly and coated my throat as it went down, though it left a bit of a bitter taste behind it.

This is a rather bitter beer, but not nearly the most bitter I've ever tried - that would have to go to a honey beer that was so bitter I just couldn't take more than a few sips. It seemed like the sort of beer that gets really harsh, really fast as it gets warm; maybe you like that, but personally, I don't.

If you're interested in this beer, your biggest problem will be finding it. If you've got a bottle still kicking around in your refrigerator or elsewhere, or you come across one, be thankful - it's been discontinued. Harviestoun's website only lists twelve-year, sixteen-year, and thirty-year varieties of Ola Dubh as currently available. Still, it also says that Ola Dubh is only available in the United States, which isn't entirely accurate; as of the evening of May 20, LCBO.com tells me that there are fifty-two bottles of Ola Dubh Special Reserve 12 in stock in various stores across Ontario - twelve in Toronto alone! BC Liquor Stores doesn't seem to have any in stock, though. For the record, mine was bottle #43005, bottled in January 2009 - 9.0% alc./vol, and 330 mL. But then, that's the standard for this sort of beer.

If you can find it, drink it. You will not be disappointed.