A Brief of Five Vancouver Bridges

Vancouver is a city profoundly influenced by its geography. Unlike Toronto, where the only real discontinuities in the landscape are the ravines carved by the glaciers as they went by, modern Vancouver is very much the triumph of engineering over natural obstacles. I found that most evident in the bridges here. There aren't that many significant bridges in Toronto, and they're rather utilitarian; they carry roads above the Don Valley and the other major ravines and not much else.

In Vancouver, the situation is different: the major bridges here span equally major bodies of water, and at least some of them were built to be more than just things that keep the traffic from falling into the waves. In the days I've spent here so far I've gone across a few of them, and found that they each have their own positive and negative qualities - observations that I'll share with you from five bridges in total, proceeding from west to east. 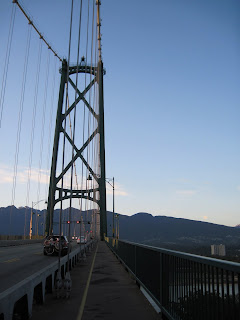 The Lions Gate Bridge is the most picturesque of Vancouver's current bridges, and is the most involved to reach by foot from downtown. It spans Burrard Inlet, linking Vancouver with the hemmed-in suburbia of the North Shore - specifically, it links the North Shore to Stanley Park. Between the southern end of the bridge and the traffic lights at West Georgia and Denham, there's nearly three kilometers of open road with deep, seemingly unbroken forest on both sides. I did this walk my first day in Vancouver, a matter of hours after stepping off the plane, and it was like I'd gone into some other world. It was one of the things I'd planned out before I arrived - if nothing else, it would provide a crackerjack platform for skyline shots.

Approaching from the south, the towers of the Lions Gate Bridge don't reveal themselves until you're close by, thanks to the equally towering trees of Stanley Park. It carries three traffic lanes and two sidewalks shared between bicyclists and pedestrians. I didn't see any bicyclists as I crossed, and only one or two other pedestrians. There are no consistent "lanes," but regular reminders that bicyclists should be using the inner half of the sidewalk and pedestrians the outer.

Frankly, I didn't appreciate the degree to which crossing the Lions Gate Bridge would terrify me until I'd already started, and at that point I was committed; I wasn't about to hike back through Stanley Park in defeat. Nevertheless, the sidewalks are only nine feet wide, with no real separation from the high-speed traffic lanes except a roughly knee-high barrier and, at intervals, the steel cables that keep the bridge suspended. On the other side, the only thing standing between me and the deceptively calm waters of Burrard Inlet was a barrier fence about five feet high. Unlike Toronto's Prince Edward Viaduct, the Lions Gate Bridge doesn't have suicide prevention barriers - for that matter, none of the Vancouver bridges I went across seemed to. What the Lions Gate does have, at the southern end and at intervals across the span, are yellow boxes that contain crisis hotline telephones.

That the Lions Gate Bridge is a suspension bridge posed one significant problem, in addition to the narrowness of the pedestrian walkway: whenever a vehicle motored past, it felt like the whole damn bridge was shaking. By the midpoint I was wondering what my chances would be like if a major earthquake tore through while I was still on it, and after passing the northern tower I walked the rest of the span at a pace just short of a run. I've never been so glad to have real, solid ground beneath my feet as I was when I made it to North Vancouver.

It's a beautiful bridge though, and well worth its place as a symbol of the city and region - if you squint, it's rather reminiscent of the Golden Gate Bridge, though it's greenish and not International Orange. I just consider myself fortunate I crossed when I did; before it went through a full deck replacement ten years ago, the sidewalks were all of four feet wide.

Note: Blogger refused to upload this photo and that of the Cambie Street Bridge, which is why I've had to take recourse to Photobucket thumbnails. Apologies for the discontinuity.

The Burrard Bridge is the westernmost of the three bridges that span False Creek and feed more or less directly into downtown Vancouver. Easily visible from Granville Island, the Burrard Bridge carries Burrard Street - yes, I know, what a shock - into Kitsilano, and it's both older and far more solid-under-the-feet than the swaying, suspended wonder that is the Lions Gate Bridge. Given the greater degree to which it's tied into Vancouver's urban fabric, it makes sense that the Burrard Bridge sets aside plenty of room for non-motor vehicle traffic; in addition to the wide pedestrian sidewalk on the western side of the bridge, bicycles have their own, physically separated, dedicated lanes on the western and eastern sides. It's a good thing, too. Vancouver completely lacks a municipal expressway system of any kind, and so during rush hour its streets tend to get a bit busy. Speaking as a pedestrian, it's totally luxurious.

For me, it just sucked that I couldn't legitimately access the eastern span with only my feet, because that way lies good views of the city and Granville Island. It's also solid; it's a steel truss bridge with more in common with the Prince Edward Viaduct than the Lions Gate Bridge. The barrier at the edge of the sidewalk is approximately the same size as that on the Lions Gate, though a bit beefier - it's made of stone rather than metal - and the crossing didn't set off any of my "you've really screwed up now, boy" senses.

The Art Deco style, in my opinion, really makes the Burrard Bridge worth experiencing. There are two observation platforms on the west side of the bridge, set within the towers; while the southern platform was closed off when I passed, the northern is still a great place for views of the West End, Kitsilano, Stanley Park, the North Shore mountains and the widening sweep of English Bay. 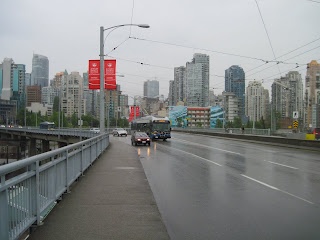 Of all Vancouver's bridges, I feel the Granville Street Bridge would fit the best in Toronto; as a product of the 1950s it's not only completely devoid of architectural value - on my first day here, when I went over to Granville Island, I overheard a couple of guys talking about the bridges and how boring this one was - but pedestrians seem to have pretty much been an afterthought in the design process. It carries Granville Street across False Creek, though Seymour Street and Howe Street both split off it on the downtown side in an elevated interchange that's rather reminiscent, to me, of the Los Angeles style - streets completely separated from the ground and the "street life," doing their own thing up in the sky.

Like the Burrard Bridge, it's a solid bridge - if you go to Granville Island you can see just how solid, because it's built directly overhead. Note, though, that there's no direct access from the bridge to the island as it's elevated ninety feet above. Nor is it decorative: the sidewalks are just sidewalks and the railings and lightpoles are stark, ordinary metal. The views of Granville Island, False Creek, and the surrounding city make up for it very slightly, and the spiderweb of trolleybus wires overhead help somewhat, but not too much.

The sidewalks are where the Granville Street Bridge really came up short. As you can see in the photograph, there's no barrier between the sidewalk and the road. At all. I don't know what it was, but the Granville Street Bridge was the place where I found it most plausible that some dude could come up behind me on the sidewalk and shove me over the side. What a wonderful Vancouver experience - come for the weather, stay for a screaming dive into beautiful False Creek!

Though it's officially known as the Cambie Bridge - so says the commemorative plaque at the north end - this bridge seems to be widely known as the Cambie Street Bridge for the extremely valid reason that it carries Cambie Street. It's the third and easternmost crossing of False Creek, and from here the eastern shore of False Creek - just before the glittering silver geodesic dome of Science World - is clearly visible. It's also the newest of the crossings, having been opened in 1985. Like Science World, it's a beneficiary of Expo 86 - appropriate, given the "transportation and communication" theme of that particular World's Fair.

It shows. While it's not much to look at in architectural terms either, the designers of this bridge recognized that it would not be used solely by drivers. If the Burrard Bridge's reservations for pedestrians are luxurious, the Cambie Street Bridge's sidewalks are beyond reproach: though shared between pedestrians and bicyclists, they're fully fourteen feet wide, and separated from traffic by a small railing, an addition with incredible psychological value. It's the only one of the major bridges directly accessible via SkyTrain - Olympic Village Station on the new Canada Line is adjacent to its southern approach. When I went across the clouds that had made my trip across the Granville Street Bridge so waterlogged had lightened considerably, and there were a few other people chattering and taking photographs of the views from over the side. I'm always thankful when I'm not the only one. It makes me seem far more normal.

On the northern side, while the routes for drivers are rather direct, for pedestrians and cyclists there's a bit of choice. Different paths peel off at different elevations, circling up, down, and around like miniature highway interchanges to put you on the ground at the right spot. It was rather well done. 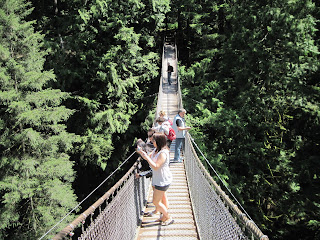 This fifth bridge is, technically speaking, not in Vancouver at all - it's actually in the District of North Vancouver, part of Metro Vancouver, in Lynn Canyon Park - but is easily accessible by TransLink's 229 bus from Lonsdale Quay or Phibbs Exchange. The Lynn Canyon Suspension Bridge is a purely pedestrian bridge, nearly a century old, strung one hundred and sixty-four feet above the rushing waters below. It links the main entrance, ecology centre, and cafe site with the extensive hiking trails on the far side of the canyon. I definitely recommend a trip across the bridge and a hike around on the other side; it's nature pure and untrammeled over there, like you're walking around on another planet, entirely unspoiled. In fact, Lynn Canyon Park has in fact been other planets on television - if you've ever watched Stargate SG-1 or Stargate Atlantis, the feel of the place will be familiar. For my part, I wouldn't have been surprised to stumble across an overgrown DHD.

A few words of caution, though: this bridge is narrow, and it sways. For me, getting across was a simple matter of grabbing onto the big woven steel cable and not letting go. Still - what a view! 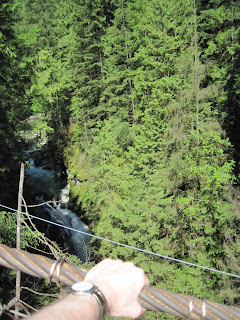