Okay, that's it, nothing to see here, time to roll up the sidewalks while we try keep the other cities from seeing the tears; the Economist Intelligence Unit has released its latest report, and according to its calculations, for the first time Vancouver is no longer the world's most liveable city. That title now goes to Melbourne, which tells me that "being in a country full of drop bears and clockspiders" does not have a negative effect on urban liveability ratings. The Toronto Star, playing to the whole hating-Vancouver-because-we-can't-move-to-Vancouver memeplex that's endemic back East, framed it as a loss of "bragging rights." Personally, it doesn't affect me; technically speaking, I don't live in Vancouver at all. More power to Melbourne for being on top of the game.

What concerns me, though, is the nature of the methodology that went into making this decision. According to the EIU's full release, which I haven't been able to locate - presumably it's one of the things you need a paid media membership in their website to access - Vancouver's rating was brought lower this year due to traffic congestion - which is honestly nothing new to Vancouver - though this particular congestion, which apparently derives from one closing of the route in April due to some kind of truck accident, is on the Malahat Highway.

Never heard of it? I'd lived here for a year and I hadn't either, and there's a good reason for that: Malahat Highway is on Vancouver Island. It's a twenty-five kilometer portion of Highway 1, the Trans-Canada Highway, on the far side of Victoria, and described as "the key Malahat Highway" by The Age of Melbourne - thus demonstrating that The Age's writers are regurgitating the EIU's press release and are unfamiliar with Vancouver's transportation infrastructure. Which is only understandable, as my knowledge of Melbourne's transportation infrastructure is limited to the fact that it has the largest streetcar network on Earth. But it seems to me that the use of this example means that the EIU has no greater understanding of Vancouver's situation.

"When we compile the scores, we look at the area around a city as well as the city itself for assessing indicators," said Jon Copestake, an analyst for the Economist who was quoted in the Vancouver Sun. "For example, congestion on the M25 is an indicator of problems in London's transport infrastructure. So we used the Malahat highway as an example of this for Vancouver."

Great, great, except for one thing... the M25 is a ring road that almost completely surrounds London. It's impossible for a ring road that surrounds a city to not be a canary in the mine for that city's transportation issues. The Malahat Highway, on the other hand, is not a ring road and does not surround Vancouver. Point of fact, there do not appear to be any ring roads anywhere in British Columbia. Not to mention that, realistically, sailing delays and fare increases on BC Ferries would have a far more substantial impact on traffic patterns in Vancouver than would the Malahat. 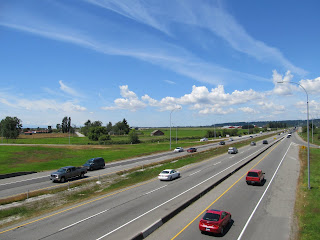 British Columbia Highway 99, passing through the farm fields of central Surrey, is a far more effective indicator of traffic issues in Vancouver by dint of actually being in Metro Vancouver.

I can understand the whole aspect of taking regional issues into account when rating a city. A look at, say, Toronto would be incomplete without also looking at the surrounding municipalities of the Greater Toronto Area, the highway network and GO Transit commuter rail system, considering that huge portions of the suburban population work in the big city. But on what planet is Victoria, an independent city on an island ninety kilometers from downtown Vancouver as the crow flies, part of Vancouver's region? This is more than the distance from Hamilton, Ontario to Niagara Falls or Kitchener-Waterloo, but would anyone consider it legitimate for Hamilton's cultural or high-tech liveability rating to be elevated because of those other cities?

What this makes me wonder is whether it's possible to make truly cogent evaluations about a thing without having specific familiarity with that thing. Someone who knew Vancouver, someone who had direct experience with it, would know better than to use the Malahat Highway as an indicator of traffic congestion in Vancouver - particularly when there are plenty of congested highways right here in the Lower Mainland. On the other hand, someone in a comfortable office in London, perhaps whose only familiarity with British Columbia is from a map, might find it believable to knock off Vancouver's points for problems on Vancouver Island. I mean, they practically have the same name, and they're right next to each other!

Honestly, the only thing these new ratings do for me is give me reason to be suspicious about their validity. If the Economist Intelligence Unit is willing to mark cities down for something that's by no stretch of the imagination in their region, not even on the same landmass, then how accurate are the rest of their assessments? I don't care about Vancouver losing the top spot in the ranking - it's more about losing faith in the idea that the ranking means something.

yes I know it's probably not pronounced that way
Posted by Phoebe Barton at 11:59