Every once in a while, Acts of Minor Treason hops out of Toronto, lands in some other city with some other light- or heavy-rail transit system, and looks at different ways of getting around on two rails, whether it's on the ground, under it, or above it all. 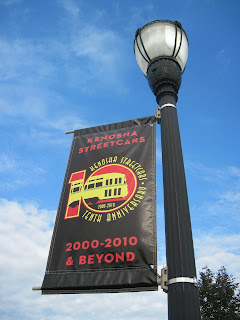 I'll admit first off that, in this case, the name of this series is a misnomer - at no point does the route of the Kenosha Electric Railway go underground. It may still work if you consider it metaphorically, though; despite it being one of the United States' newest light rail transit systems, it doesn't seem like overly many people are aware that streetcars once more ply the streets of Kenosha, Wisconsin, a city of just less than a hundred thousand people on the northern fringe of the Chicago commuter belt.

"Incongruity" doesn't begin to describe it. It seems utterly unbelievable that streetcars not only exist in modern Kenosha, but were reintroduced in 2000 nearly seventy years after the first system's removal, when that same transportation paradigm is under assault in places where it's been a mainstay for generations. Not only is it a tourist attraction in its own right, since streetcars aren't nearly as common in the Midwestern United States as they used to be, but an example that there's more than one urban design philosophy that works.

Yet they do. They do, and it's great. I was able to pay a short visit to Kenosha and its streetcar system on my way west to Vancouver - and beyond indulging my transit interests, it helped me say goodbye to home. 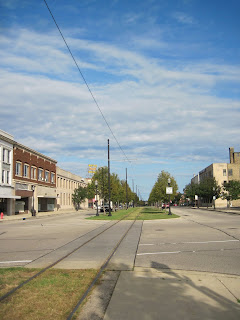 The streetcar line proceeds east toward Lake Michigan in the tree-lined median of 56th Avenue.
It shouldn't come as much of a surprise that the Kenosha Electric Railway1, operated by Kenosha Area Transit, is not a particularly extensive system; despite whatever efficiencies they have, rail-based transit networks are nevertheless expensive to maintain, and Kenosha doesn't have the resources of a metropolis. As a result, the streetcar system consists of a single-track loop in downtown Kenosha along 56th Street, 54th Street, and 11th Avenue, with streetcars travelling between the HarborPark transit-oriented development, rising on the shore of Lake Michigan, in the east and Kenosha Metra station, the northernmost link in Chicago's commuter rail system, in the west, over a distance of approximately two miles (3.2 kilometers).

For the most part, the Kenosha Electric Railway operates in its own right-of-way: along 56th streetcars roll in the middle of a grassy strip separated by trees from the roadway, while on parts of 54th and on 11th Avenue, streetcars share the road the same way they always have.

I'm not sure whether or not the system would best be classified as a heritage line. While it is one of Kenosha's largest tourist draws, and it does rely on heritage streetcars, 63,000 people per year ride it - what's more, before the recession struck, Kenosha's City Council was looking into further extending the line, perhaps to make it into a true network. After having seen it, I'd say it's more of a proof-of-concept for small-city transit orientation in the 21st century, as well as a working transit museum. 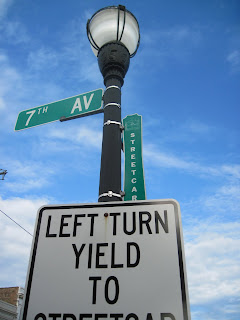 The streetcar stop at 56th Street and 7th Avenue in downtown Kenosha.
There are no stations on the Kenosha Electric Railway, just stops - seventeen of them salted along the route, generally at major cross streets. It took me a few minutes to find one even with the map, and I'm glad the streetcar didn't come while I was hanging around at what eventually turned out to be nothing more than a mailbox. In my defense, I'd been without sleep for a day and a half at that point.

Streetcars may pause at the Joseph McCarthy Transit Center - the existence of which demonstrates either that, in Wisconsin at least, McCarthy is remembered for something other than anticommunism and drunkenness, or that multiple people can have the same name - where the route intersects with many of Kenosha Area Transit's regular bus routes. The Transit Center is also the system's carbarn, where out-of-service streetcars are kept. Even then, though, there's no enclosed station structure. 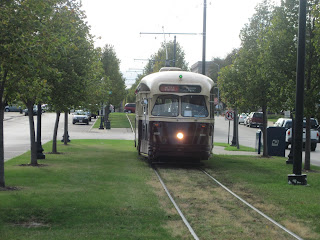 PCC #4610 "Toronto" pushes east along 56th Avenue in the separated right-of-way.
It's not much of a stretch to say that Kenosha likely operates the smallest streetcar fleet in the world. The system is served by five President's Conference Committee streetcars, all of them formerly having served on the rails in Toronto, though my experience suggests that only one car operates on any given day. Unlike other cities, where different cars of the same model are essentially identical, each of Kenosha's five streetcars are visually unique.

For its streetcar system, Kenosha Area Transit didn't simply adapt its livery. Instead, in a move that may support the "working transit museum" idea, each of the five PCCs retain the livery of a former PCC operator in North America. Aside from PCC 4610, which maintains the look it had when it worked the Toronto Transit Commission's Harbourfront route in the 1990s, the streetcars carry the flags of ex-operators in Chicago, Pittsburgh, Cincinnati, and Johnstown, Pennsylvania - itself the smallest city ever to operate PCCs.

There aren't many ads on the Kenosha streetcars; unsurprising, given that it's not exactly bursting at the seams. The fact is, for the whole time I rode #4610 around the loop and then some, I only ever shared it with the operator. Much of #4610 advertisement space, at least on #4610, is instead occupied by information and memorabilia such as reproductions of original advertisements from historic streetcar manufacturers, and I imagine it's similar on the other four cars.

I'm not sure whether or not it lies with the streetcars themselves - perhaps only #4610 - or the rails, but my impression was that the ride was somewhat rougher and a bit louder than it is in Toronto, and if you've ever heard a streetcar squeak and grind its way through a wide turn, you'll know that's saying something. 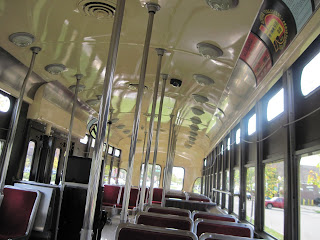 The rear interior of PCC #4610 "Toronto."
So long as you can locate a streetcar stop, you'll do fine - the only big problem I found was that the signs weren't exactly attention-grabbing at first rub, being tall and narrow with white letters on a green backing in what seems like a deliberate effort to capture a "historic" flavor. The cars necessarily echo historic practices, and are resolutely high-floor vehicles; I'm unsure if the equipment at the rear doors is an elevator system to make the cars accessible, or if it's just to keep people from skipping out on the last half of the fare.

Hopefully, that doesn't happen very often. The Kenosha Electric Railway's fares are, in my opinion, firmly reasonable for the depth of service provided. Adult fare is $1, with 50 cents paid upon boarding and the remainder on alighting, a practice reminiscent of Boston. You can also pick up a $2 all-day streetcar pass good for unlimited boarding and alighting, and if I'd learned about it before we were already back on the road to Milwaukee, I'd have picked one up as a souvenir.

Service isn't exactly available around the clock, though. Levels vary depending on the time of year; from January 5 to February 28 the streetcars only roll on weekends, presumably to minimize the snow-clearing expense, and for all of March weekday service is limited to five hours in the late morning and early afternoon. The most consistent service is provided under Summer Hours, which despite the name run from April 1 until January 4 (because, you know, when I think of Wisconsin in December I think summer, baby), when weekday service runs from 11:05 AM to 6:35 PM. Weekend service is unchanged throughout the year, consistently 10:05 AM to 5:35 PM. I'm not sure if you'll ever see more than one streetcar plying the route at a time - from my observations, a single PCC is probably more than sufficient to more than sufficient to meet demand outside of extraordinary situations.

Once you're aboard, it's an overall nice ride, no matter the idiosyncracies of the track. The oddest thing I found about #4610 in particular is that while it outwardly is the same as the TTC's remaining two PCCs, save for the "The TTC Welcomes You To Toronto" on the sides and the information sign on the front, the interior seating is the same kind used on the modern CLRV and ALRV fleet, rather than the comfortable near-couches you'll find in Toronto's two survivors.

Conclusion
When I look at Kenosha and its electric railway, I see the truth in the observation that nothing ever ends. While so many of Toronto's streetcars were rewarded with the scrapheap when they reached the ends of their lives, these five have taken up the torch and hold the streetcar legacy high. The fact is, no matter how often politicians fulminate about streetcars, gridlock, and congestion, they represent a mode of living that built successful, vital cities. It may be that Kenosha's example will be taken up by other cities in similar situations, and I hope that's the eventual case - I suggested the installation of a streetcar line in Barrie, Ontario a while ago, based firmly on what I then knew about Kenosha's.

There's plenty of room in cities, both small and large, for streetcar systems, and plenty of cities that once had them still retain the districts that streetcars built. As we struggle for solutions to the problems that face the cityscape today, while we cast about for an answer to the diffusions and inefficiencies that society's torrid romance with the automobile made possible, the example of Kenosha can and should stand as a reminder that the lessons of the past still have applications in the present day.

I'd like to see more systems like Kenosha's, and ones even more extensive. If enough cities followed its lead, perhaps there'd even be a market for a new production run of PCCs - that Art Deco style will never die, and with good cause. Perhaps in years to come, a few ex-Toronto CLRVs will find their own quiet dignity along Lake Michigan's shore. 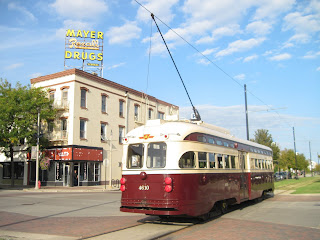 Be seeing you.
Posted by Phoebe Barton at 10:17