What the CBC Means to Me

It's just another data point that the verbal assurances of the Conservative Party aren't worth the air molecules that got shook around so you could hear them. Nearly a year after finally seizing a majority government that may well owe its existence to a campaign of electoral fraud, the knives are coming out in Ottawa. Foreign aid? Cut. Military expenditures? Cut. Even Katimavik has been cut, and hell, I didn't even know Katimavik was still around; I thought Mulroney had got rid of it twenty years ago.

However, some of the biggest cuts were reserved for the Canadian Broadcasting Corporation, which is one hell of a way to honor its seventy-fifth anniversary. Specifically the CBC is facing a 10.4% cut, which will see its funding go down by $115 million in 2015 compared to 2012's outlay. Its budget is literally being decimated. Contrast this with what happened back in May 2011, when Heritage Minister James Moore assured us that the Conservatives "believe in the national public broadcaster. We have said that we will maintain or increase support for the CBC. That is our platform and we have said that before and we will commit to that." That's the great thing about the internet; it really bricks up the memory hole.

Already the usual suspects are coming out of the woodwork in regard to this. The other day Larry Miller, MP for Bruce—Grey—Owen Sound, appeared on Sun News to complain about how the CBC cuts didn't go far enough and bemoan that it was only a cut of 10% over three years, rather than a 10% cut per year. James Moore has already changed his tune, saying that the CBC "can be run more efficiently," which really smells like gravy to me. Are claims of the gravy train at the CBC soon to follow?

I involve myself in this because I believe the CBC is important, that it has an important place in our society and that it is key to the development of Canadian arts and culture - and if you're thinking of dismissing that as some Dipper bullshit, keep in mind that James Moore said, essentially, the exact same thing back in May. Though I still regularly read CBC News on its website and wander through the CBC Archives from time to time, it's been a while since I've watched CBC on TV or listened to it on the radio - in my defense, my rabbit ears can't pick up CBC and the antenna on my radio is thoroughly busted. But it wasn't always like that. 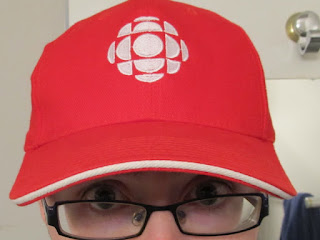 Let's go back, say, fifteen years - Earth, 1997: specifically Barrie, Ontario, in a house that was within sight of the CKVR transmission tower. Though the station had rebranded itself as "the New VR" in the first stage of a process that eventually led to the modern CTV Two network, it had been a CBC affiliate before that and at that point still simulcasted a fair bit of CBC programming. I had a cheapass CRT television balanced on top of my dresser, and thanks to the broadcast tower's proximity I didn't need rabbit ears to pick up the signal - not that rabbit ears would have been worth much; there weren't any other broadcasters in Barrie, and I wasn't going to be able to pick up a signal from Toronto with them.

I was still able to get things I considered worth watching, though. At 4 PM, I think, there was Jonovision - Jonathan Torrens' 90s talk show for teens - and I believe it was at 5 that Family Matters came on... you know, the show with Urkel. Sandwiched between them was a show that really stuck with me, not the least because it was made in Halifax and, for me, at the time Halifax was a distant and exotic place full of wonder and mystery: Street Cents.

This was a show targeted at teenagers, built around the idea of instilling wise consumer practices - knowing how to not be taken advantage of in the marketplace, how to spend your money intelligently, and to look beyond the claims of advertising and gauge the products themselves in order to make a more canny customer in a capitalist world. There are clips of it scattered all around YouTube, and even a full episode or two. I like to think that the show played a part in making me the overly suspicious bastard I am today. One laudable thing about it, which I can't recall if it even registered with me at the time, is that it aired commercial-free; what "commercials" existed were parodies and sendups. It existed to be a consumer review and education show for teens, and the presence of commercials would have led to a difficult balancing act - it's a bit more difficult to pass judgement when the judged are, in part, paying your bills.

A show like Street Cents, in the form the CBC broadcasted it, would never air on a major network... a major commercial network, that is. The only other place in North America I can imagine it landing on would be PBS - another public broadcaster like the CBC, which aired cherished childhood shows like Where in the World is Carmen Sandiego? and Reading Rainbow, and which has itself regularly come under attack from the Republicans. Really, can you imagine that kind of show on CTV, say, or NBC? Not only occupying precious time that could be filled with another goddamn celebrity dancing show, but not even generating any commercial revenue?

Some critics of the CBC attack it as a "state broadcaster," as if that was enough - this is bullshit, and an obfuscation of the truth. The CBC receives support from the government, but it isn't an arm of the government, and I think that's the key as to why the Conservatives dislike it so much. If the CBC really was a state broadcaster, the Conservatives wouldn't be cutting its budget - they'd be using it to parrot their messages from one end of the country to the other. When it comes to state broadcasters in Canada, where "state broadcaster" means "a broadcasting organ firmly loyal to the state and always acting to advance the interests of its leadership," you need look no farther than the Sun News Network - practically Canada's own Pravda.

James Moore may have been shooting smoke back in May, but that doesn't mean he didn't stumble onto the truth. The CBC is important; it is a key Canadian cultural institution. Its government funding allows it an independence that could give it power if only it was done right - power to look deeply into things without worrying about whether this story will offend that major advertiser. In an ideal world, the CBC wouldn't need to wade into the ratings battle with the commercial networks. The ideal would be for the CBC to be supported by television license fees, such as Japan's NHK, the BBC, and practically every other public broadcaster in the Anglosphere. But it would never fly, not now. Politicians in Metro Vancouver received death threats when they aired the possibility of taxing vehicles; what do you think the uproar would be if the government decided it was going to start taxing TVs?

The CBC continues to play an important role in Canada. The fact that the Conservatives hate it so much only gives it all the more reason to stick around, I think.

Funding for this post was also provided by the Corporation for Public Broadcasting, the Carnegie Corporation of New York, the National Science Foundation, and the financial support of readers like you... no, not really. But that'd be nice.
Posted by Phoebe Barton at 13:47