Looking out from my windows, it seems as if the worst of it is over--but then, if nothing else, the past twenty-four hours have been instructive as to how quickly the situation can flip from "ordinary" to "the worst of it." I was out and about in downtown Toronto yesterday, taking advantage of a day off after flitting away to the Ottawa Valley, and though the typical July heat and humidity hung low in the air there wasn't anything unusual about it. Later on, not even the unusual darkness at 5 PM elicited much commentary from me aside from "man, it's dark," because I am a writer that is capable of noticing the subtlest of things.

When I finally noticed the rain coming down, well--I had to stand for a while and watch it. It's not the first time I've seen that sort of view from here, seen the skyscrapers of North York and Thorncliffe Park hidden from view behind a veil of precipitation... but those times were all in winter, during major blizzards. Yesterday the rain was coming down in sheets so fast and so thick that it practically hid my next-door neighbors behind raging walls of water. 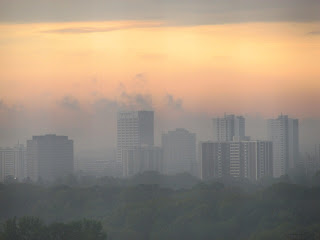 Like this, but with water instead of smog, and turned up to eleven.

While it was coming down, I couldn't help but think back to those projections which suggest that come the 2040s, this sort of rain activity may well become de rigeur for Toronto. I'd hope that all this rain will be something of a wake-up call, something that will give our leaders the kicks they need to start preparing for future contingencies, the same way that Hurricane Hazel--which, incidentally, yesterday's storm defeated in terms of sheer rainfall--kicked the city into ending residential development in the ravines.

There were houses washed away in 1954, but not in 2013. We've shown that we can learn from the past, to some degree--now's the time to pay close attention to our latest lesson.
Posted by Phoebe Barton at 10:02