The Air Canada Centre, the Power, and the Glory

Things are not yet all right in Toronto. Though recovery is proceeding apace, getting more rain in an hour than in a typical July brings down a strain on the systems that many of them just weren't built for. As I understand there are still spots in the west end that haven't had electricity since before the rain started falling, and while the policy of rolling blackouts that Toronto Hydro instituted yesterday may have spared the city from a further collapse of its electrical grid, the simple fact is that in parts it really is "hanging by a thread," as has been said. Mayor Ford was right when he asked the people of Toronto to cut back their power consumption--the less juice is being sucked up, after all, the less strain there is on the transmission system and the less chance that something new will break before the flooded transmission stations in Etobicoke get returned to service.

It seems that no one told this to the management of the Air Canada Centre... or, more realistically, they just didn't give a damn. Last night at 7 o'clock, when the rolling blackouts were flickering their way through west Toronto, the twelve-meter big-screen that overlooks Bremner Boulevard was lit up as if power was free. A big-screen that probably consumes more electricity than entire houses. A big-screen that shows nothing but an endless loop of commercials. God forbid the people milling around waiting for the One Direction concert be unable to learn about the price of pitchers at the Real Sports Bar & Grill or watch the same goddamn car commercials over and over. 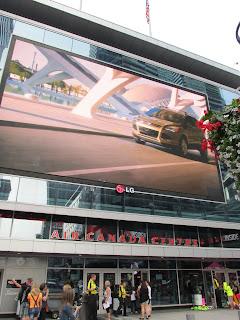 Oh, thank god! If I couldn't watch silent car commercials on a television bigger than my apartment, I would just die.

I was here in Toronto for the 2003 blackout as well. I remember the entire city being dark, I remember the electricity coming back only gradually, the next day, with the TTC still shut down so as not to tax the grid, and I remember the pictures and video of City Hall with practically every light in both towers burning. As I recall, the municipal government took some flak for that. While yesterday's power situation was far less grave, that doesn't mean that the ACC should get off easy. Turning off their exterior screen is quite literally the least they could have done to help conserve power--but, hell, this is a screen that keeps flickering well after the sun has set, just on the off chance that anyone wandering around Maple Leaf Square may never have known there is a thing called Kraft Dinner which they could buy.

I know that this one screen is just a drop in the bucket--and while it's an exceptionally large drop, the bucket isn't too small itself. For hell's sake, though... the ACC didn't even bother to put up the appearance of power conservation, and for fundamentally worthless shit at that. What am I supposed to think here?
Posted by Phoebe Barton at 10:55