HisT.O.ry: The Lion of the Way

Every once in a while, between the past and future, Acts of Minor Treason takes time to look backward at some of Toronto's history - preferably the parts of it that haven't been bulldozed already.

If you didn't know to look for it, you'd hardly know it was there at all.

Toronto's automotive age started in 1893 when a local patent attorney, Frederick Barnard Featherstonhaugh1, commissioned an electric carriage capable of the breakneck speed of fifteen miles per hour. The period of prosperity that followed the First World War brought cars into the reach of the middle class for the first time, but even then Toronto didn't install its first traffic light until 1925. It was only in the '30s, in the grip of depression, that the age really began.

The Queen Elizabeth Way was Canada's first superhighway. It didn't come about all at once; its lineage goes back to 1931's Middle Road, which linked Highway 27 in Etobicoke to Highway 10 in modern-day Peel Region. At the time, there was no direct link between Toronto and Niagara Falls, Ontario2, and travellers had to rely on more primitive roads such as the Dundas Highway.

The QEW changed all that when it was dedicated in 1939, the first illuminated four-lane highway in the world. It extended from the Rainbow Bridge in Niagara Falls to Highway 27, and a year later was extended to the Humber River on the Toronto-Etobicoke border, where the Gardiner Expressway would later join it. The highway itself was named in honor of, and opened by, the Queen Consort on the occasion of her and King George VI's royal visit to Canada in 1939, the first such visit by a reigning monarch.

They may have dedicated the highway itself, but the monument that was to be placed at its eastern terminus was later dedicated in honor of them. 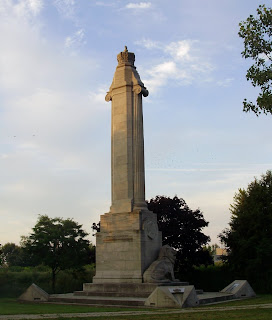 The Queen Elizabeth Way Monument, also known as the Lion Monument, was for more than thirty years the "lucky lion" that stood watch at Toronto's western edge while drivers motored past. Designed by Toronto architect W.L. Somerville, whose previous work included the Shakespeare Memorial Theatre in London, what might on its own have been a rather phallic pillar of Queenston limestone - the original intention of using Indiana limestone was, in those heady days of Empire, not nearly "patriotic" enough - was enlivened by sculpture and relief by two transplanted American, Toronto-based artists, Frances Loring and Florence Wyle.

While Wyle's efforts were focused on the relief profile of the monarchs, Loring was behind the lion that gave the monument its popular name. The sculpture on the monument is of a lion, one of England's traditional symbols, awakening in the face of war. Despite the patriotic overtones, some work on the monument and its patriotic message3 was done in secret by a German stonecutter, who had replaced an English worker who, it seems, just couldn't bring himself to take orders from women. 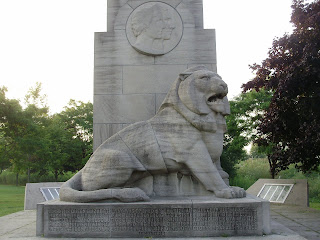 In the years after the monument's completion, its lion guardian became perhaps the most well-known of Frances Loring's works, if only because so many people passed by it so regularly as they went up and down the QEW. "Loring herself liked the lion that had become synonymous with her name enormously," writes Elspeth Cameron in a shared biography of Loring and Wyle, "but preferred her Deer Panel at the Oakes Pavilion." The Sculptors' Society of Canada produced a postcard featuring the lion in 1957, and was described by art critic Pearl McCarthy as "one of the finest pieces of outdoor sculpture in Canada."

This popularity outlasted the deaths of Wyle and Loring in January and February 1968, respectively, but not by much. While the sunset of the British Empire in the wake of the Second World War was confined primarily to its colonies in Africa, Asia, and the Caribbean, even in Canada the ties of Empire ceased to closely bind. At the same time, postwar economic progress led to Canada's reconstruction around the car, and what had been a superhighway in 1939 was had become inadequate to demand as the 1970s dawned.

The issue was simple - the Queen Elizabeth Way had to be widened to accommodate additional traffic. Today, the highway is six-laned throughout Metropolitan Toronto, and parts of it elsewhere are wider still. The presence of the Queen Elizabeth Way Monument was an impediment to this, and the QEW's seamless integration with the Gardiner Expressway made any possible routing-around unfeasible. As ornate as it may have been, the monument was standing in the way of the future.

It was up to the Ministry of Transportation to resolve the issue, and considering that the monument was then a historical object in Toronto, it should come as no surprise that its original intention was to simply demolish it. Thanks to editorials in the Globe and Mail and letter-writing campaigns, in 1972 the Ministry instead made the decision to relocate the monument.

Stone by stone, in 1974 the Queen Elizabeth Way monument was carefully dismantled and, after the official determination that it would not mesh well with its potential surroundings in Ontario Place, transported to the "pleasant surroundings" of Sir Casimir Gzowski Park on the shores of Humber Bay. There, it was reassembled around a newly-built concrete core and unveiled in August 1975. History had been saved.

The preservers of the Queen Elizabeth Way Monument were able to rally support thanks to widespread public familiarity with it; whenever anyone took the QEW in or out of Toronto, the lion was waiting there for them. Once removed to its resting place in Gzowski Park, between the trees and the lakeshore, it became essentially invisible to motorists passing by, and slowly but surely fell down the memory hole.

Today the monument stands alone in a grassy field next to a narrow gravel path, well removed from the road. It's weathered the years well in its isolation, and while it was spared the wrecking ball or the bulldozer, it remains as a solitary reminder of a bygone age. It's a reflection of a time when Canada marched proudly in lockstep with the Empire, and when Toronto was a British city through and through.

Those times have gone, and we're better off for that. Nevertheless, it behooves us to remember them, and it's monuments such as these that anchor the past in the minds of the future.

HOW TO GET THERE: The Queen Elizabeth Way Monument is somewhat isolated from transit routes by its location between the highway and the water. Your best bet would be to take the 501 Queen streetcar to Windermere Avenue or the South Kingsway and walk from there; the 77 Swansea and 66D Prince Edward bus routes, respectively originating from Runnymede station and Old Mill station, also serve the general area.

2 Which is always a fun place to go.

Previous HisT.O.ry:
at last, a BA in history begins to pay for itself
Posted by A.P. Barton at 09:44