no, this is not about star trek, so put that right out of your mind

"History is bunk," Henry Ford is said to have said. Aside from the assembly line and the automotive corporation that bears his name, his rejection of history is perhaps his most enduring historical legacy. Whether he's right or wrong, that attitude endures today and makes its presence felt throughout modern culture, in varied degrees. The series finale of Battlestar Galactica explores this with regard to the Twelve Colonies of Kobol. James Patrick Kelly's 1990 story "Mr. Boy" features a scene at a "smash party," where relics and antiques alike are destroyed purely for entertainment value. In short, there seems to be no shortage of expressions in modern culture that, for many people, history is irrelevant.

"Who cares?" the average person might say. History, by its very definition, happened in the past and as such only tangentially affects the present. Sure, disagreements and grudges and genocides tend to have their roots in it, but for the whole, most people on the street probably don't care too much about what it took to get them there. That the street is there to be walked on is enough for everyday (see how that word is in this case used appropriately, Toronto Transit Commission) purposes. That history, on the whole, doesn't matter.

History matters. That's my opinion, at least, and it's not just because without it my B.A. would be meaningless. History is not a collection of dates and names and battles, it's the sum total of a hundred thousand years of pain, sweat, toil, and blood. Nothing is eternal, but I consider it humanity's duty to rage against entropy until there's not a joule of energy left to spend doing so - to, as Dylan Thomas wrote, "not go gentle into that good night."

So if you allow history to be forgotten, if you allow the scars of that suffering to fade, if you permit the stories of the past to be caught by the wind like a kite with a broken string, you do more than divorce yourself from the lessons of what's already come. You dishonor the struggles of all that came before you - you make them irrelevant. Forgetting is something close to betrayal. Something not remembered might as well not have happened.

Humans strive for remembrance because it's the only real form of immortality open to us. Though the lesson of Ozymandias will be taught in the end, we've still got time before our final exams. If we blow it off, then all these moments, all those years, will be nothing more than oil paintings left out in the rain.

Also, here's a picture I took of a couple Canada geese. Yay! 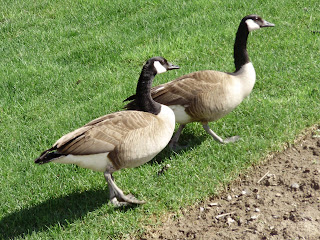 yes, I did just watch the series finale of battlestar galactica, why do you ask?
Posted by A.P. Barton at 10:54